Progressive Conservative Party of Ontario Leader Patrick Brown was welcomed to a thundering crowd on Saturday. His two accomplished younger sisters, Stephanie and Fiona Brown, a dentist and lawyer respectively, introduced their brother to the stage at the PC’s policy convention.

“Mental health should be treated no differently than physical health,” said Brown to loud applause midway through his speech.

In Brown’s speech he went over his core promises of his party’s policy manifesto, laid out in glossy magazine for the press and party members. 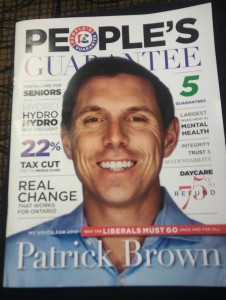 Brown’s speech focused on his top five proposals that he and the PCs are calling “the People’s Guarantee.”

The top five proposals comprise of lowering income tax for the middle class by 22.5 per cent, a 75 per cent tax refund for childcare, an average of 12 per cent more off hydro, $1.9 billion, matching federal funds, to mental health over ten years and the “first ever Trust, Integrity, and Accountability Act.” Brown also signed a promise that he would not seek a second term if he becomes premier and doesn’t deliver on these core proposals. No word was given on what he’d do in the case of a minority mandate.

Brown’s and the Ontario PCs’ policy included almost another 150 proposals to overhaul the provincial government if they take over the reigns in 2018. A lot of these proposals are either tax breaks for Ontarians or additional program and infrastructure spending—like $5 billion in funding for new subways in the GTA—yet the PCs are claiming they’d balance the books in their second year at the helm.

Liberal MPP and Minister of Transportation Stephen Del Duca was quick to rain on the PCs’ parade. “Over the last two years or so, Patrick Brown has been running as fast and as hard as he possibly can away from his track record,” Del Duca said to reporters shortly after Brown’s speech.

“We know, that after all of the policy discussions that he still refuses to level with the people of Ontario about what he would cut when he pulls back the curtain—and we’ve seen this in the province of Ontario.”

Despite the Liberals and the NDP bashing the PCs’ manifesto, the PCs also had economic experts give their de facto stamp of approval.

The PCs had the first Parliamentary Budget Officer Kevin Page (appointed by the Harper government) look over and assess their plan.

“The fiscal estimates underlying the Ontario PC platform have been deemed reasonable,” said Page in a statement included in the PC’s press release.

“The Ontario PC policy platform proposes to find 2.8 billion in savings by 2021. Controlling costs for a provincial government in Canada depends mainly on the organization and compensation of public sector workers,” wrote Milligan in a blog post. “In my view, a government with firm attention to cost management can achieve savings in the range proposed by the Ontario PC platform.”

How the PCs intend to find those cuts is still largely up in the air, especially with all of their new spending and tax cut proposals.

During the introduction Brown’s sisters joked about how they convinced Brown to finally change his haircut from the gelled hedgehog look to a more natural, slightly longer do.

For those rolling their eyes, perception is reality is no truer than in politics. Demeanour and appearance matter, and to many, even some within the PCPO apparently, according to a Toronto Star profile from yesterday anyway, believe Brown hasn’t exactly projected warmth in public appearances and ads before now. But that likely won’t matter much because the majority of Ontarians haven’t paid attention yet (less than half of residents know who Brown is at this point). His sisters and supporters certainly gave him a boost on Saturday.

Brown’s speech appeared to go over well with members I spoke to, even though there were a lack fiscal cuts proposed.

“I was very impressed with his vision for reducing taxes for the middle class,” said Suzanne Pupkin, a PC member, part-time dental hygienist and full-time real estate agent. “Loved his policy for funding mental illness.”