(What Was Wrong With CBC’s The National Mission Statement.)

Time allotment for The National stories on Sunday:

Last night’s The National was the last show in the old format, and you can’t say they didn’t go out with a bang in having a blockbuster news day.

The lead story was the horrific massacre in Texas. The story was well done and very informative for how little time they had to prepare the story. (Have to give credit where credit is due.) I don’t really want to discuss this horrible tragedy anymore than that for now.

The National then moved on to the main event, the Paradise Papers that they–in tandem with journalists from around the world–had been working on for months. The CBC spent 29 minutes on the Bronfmans and Koblers apparent offshore trust and their connection to the Liberal Party of Canada and PM Justin Trudeau. Here’s The Toronto Star piece in case you missed it. (The Star report, although very thorough, conveniently left out the bombshell factoid that the Bronfman family apparently pressured the CRA into letting them move $2 billion of their family fortune out of Canada tax-free. Kudos to The National for bringing it up.) I’d say most of this reporting was fair, however, The National broke up the reporting on the Canadian angle to the Paradise Papers into two parts, with the first part as a four-minute news report and analysis, then reports on Trump’s top advisor’ and the Queen’s connections to the tax haven followed before the latter 25-minute feature story on the Bronfmans and Koblers (worth watching) was aired.

The National‘s initial report was adequate. They even gave opposition MPs, including Conservative Leader Andrew Scheer, time to speak about the revelation. The only problem I had was how the CBC didn’t go deeper into Trudeau’s relationship with Bronfman. It seems the CBC is pinning all of this on the Bronfmans and their associates instead of focusing on how Trudeau and his father play a role in this. What’s more interesting is how the reporting on Trudeau was juxtaposed with the reporting on Trump and his connection to his top adviser. In that three-minute report the CBC went for the jugular in tying Trump to billionaire Wilbur Ross. In the 25-minute in-depth feature about the Bronfmans and their tax avoidance Trudeau is only presented at the start of the report where they show about a minute of him on the campaign trail gladhanding with supporters and telling adoring Liberal crowds sweet nothings. Very little is mentioned after that about Trudeau’s personal relationship and friendship to Stephen Bronfman. The way CBC presented the story–through images anyway–made it appear as if a smiling and loved-by-everyone Trudeau just met this Bronfman bloke on the campaign trails. Here’s a bunch of the cheery images of Trudeau in the extended segment talking about the supposed heyday of Trudeau mania 2.0 (even though he won only 0.1 per cent more than Harper did in the popular vote). CBC was sure feeling nostalgia for sunnier days. 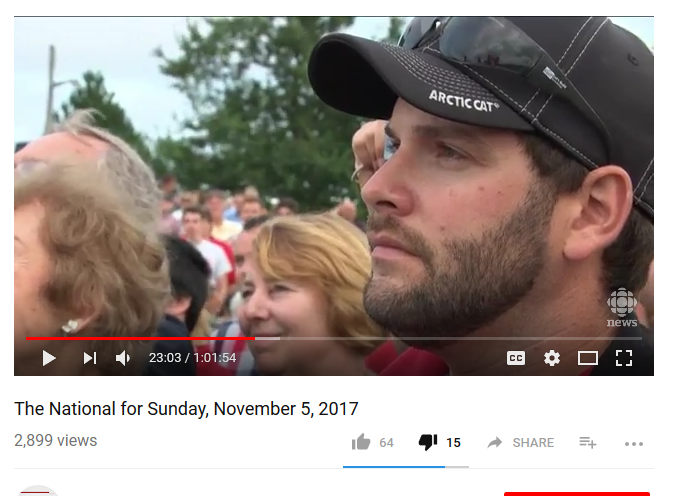 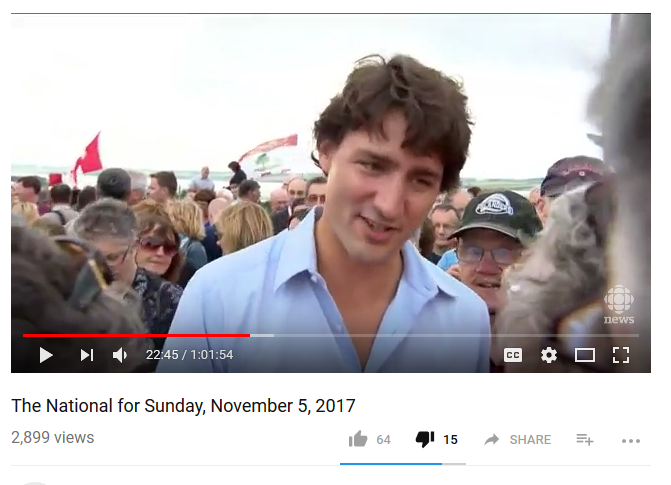 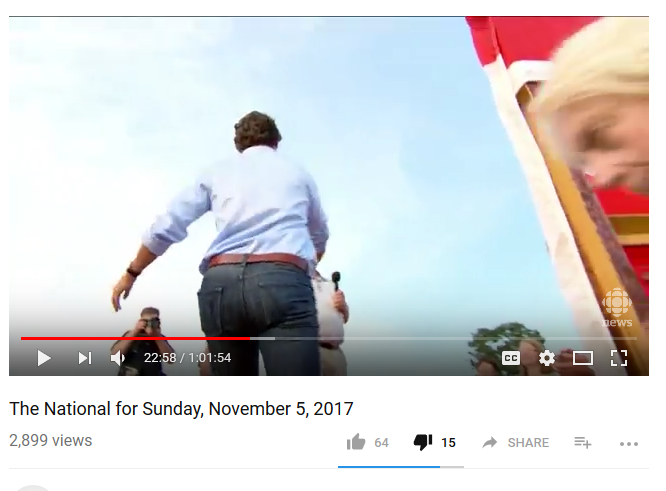 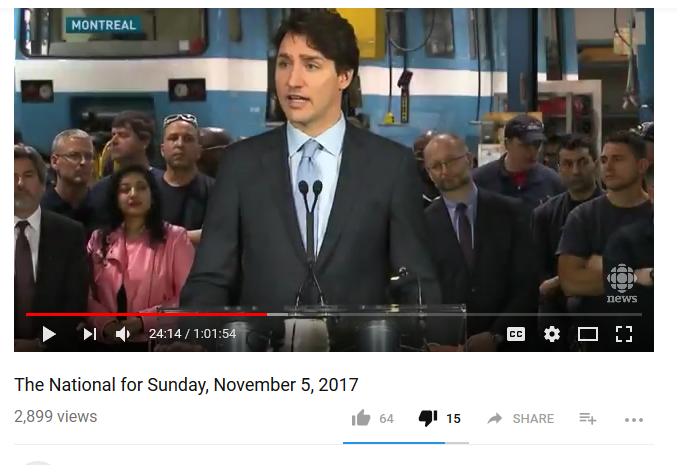 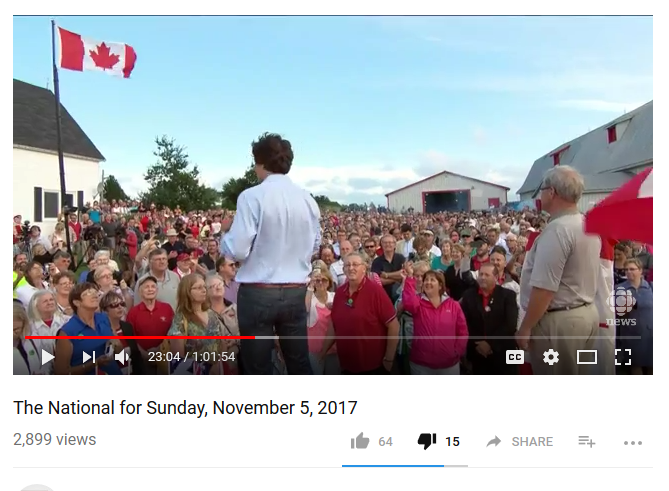 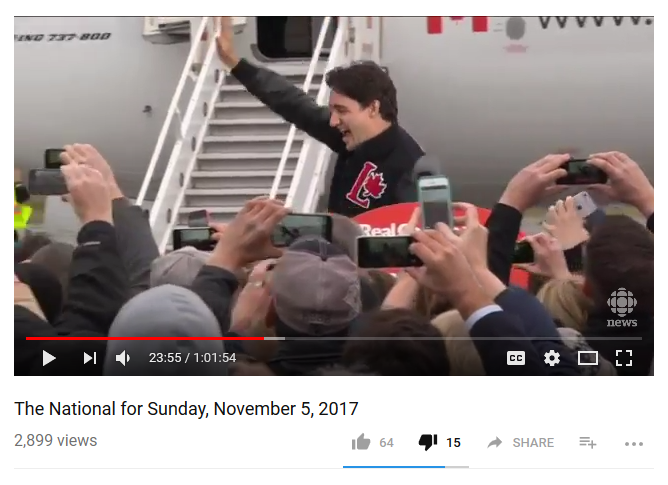 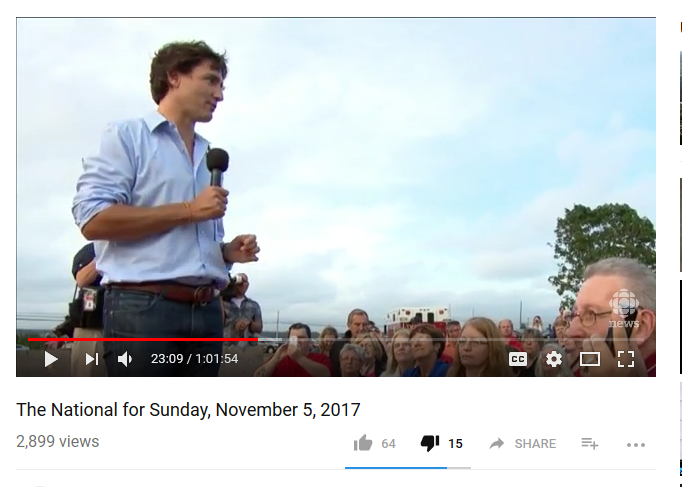 Now compare that to the images of Trump in the report about his business associates ties to the Paradise Papers. 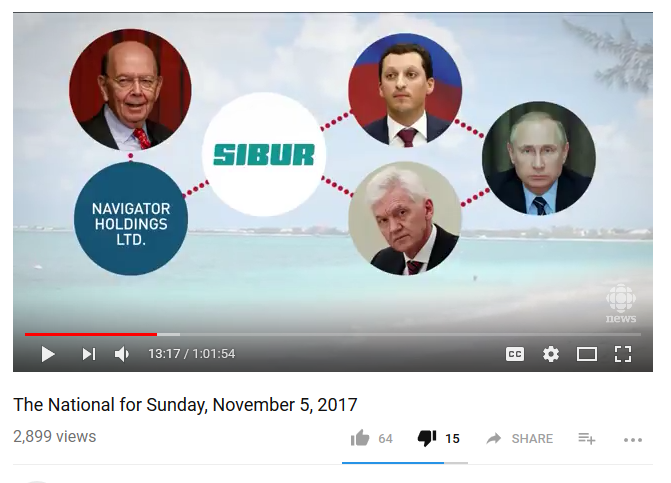 When the two stories are juxtaposed its as if Trudeau has just been unwittingly brought down by an acquaintance while the ominous U.S. report suggest Trump is linked to billionaire Wilbur Ross’ company’s ties to Russia, too. It’s also interesting that the CBC did not do a similar web of faces of the two generations of Bronfmans, Kolbers, and Trudeaus all closely tied. Below I provided a transcript of the Trump report and then the introduction to the feature on the Bronfmans, the part that talks about Trudeau, so you can see the contrast for yourself.

Heather Hiscox: The more than thirteen-million records in this leak also reveal secrets in Washington, including a top member of Donald Trump’s cabinet. Wilbur Ross is Commerce Secretary. But his deep ties to Trump, and as these documents suggest, his financial ties to Russia are what’s causing a stir tonight. The New York Times and the BBC looked into this part of the story as part of global collaboration. Keith Boag has the details.

Boag: One thing that separates Wilbur Ross from the other billionaires that Donald Trump has at his cabinet table is that how far back in the President’s history he goes, and how important he was in making Trump what he is today.

David J. Johnston: If it hadn’t been for Wilbur Ross Trump would not be in the White House.

Boag: David J. Johnston has chronicled the ups and downs of Trump’s business career for three decades. Including his failure in Atlantic New Jersey, with the money losing Taj Mahal that almost sank Trump. Ross, Trained as a bankruptcy adviser, engineered a deal for Trump that kept him afloat by establishing that the Trump name had its own value as a brand.

David J. Johnston: Wilbur Ross was a key negotiator in Donald Trump not having to go through bankruptcy and not getting swept into the dustbin of history.

Boag: This year Ross became the United States Secretary of Commerce. He divested most of his business assets, but kept a stake in a shipping company called Navigator, where he was once chairman. One of Navigator’s biggest customers is Russia’s gas and petro-chemical company Sibur. mong Sibur’s owners, President Vladimir Putin’s son-in-law, and…

(Now introduction of the feature on the Bronfmans.)

Gillian Findlay: Well he is probably the Bronfman that no-one has ever heard of, Heather. He’s always kept a very low-profile as a businessman, a philanthropist, an environmentalist. But in 2013 he became a powerful player in Justin Trudeau’s Liberal Party.

Trudeau: Pleasure to meet you.

Person in the crowd: Hi, Justin.

Gillian Findlay: It was a summer caucus retreat in P.E.I. And for the first time in a long time Liberals were upbeat [cheery music in the background]. A new charismatic leader [cheers], A new hope for power.

Trudeau: Across the country people have told me that we need better. And for the first time in a long time, people are open and hopeful about the Liberal party of Canada.

Findlay: Among the assembled was a man not much use to the campaigning part of politics, but a man the party would now rely on to raise the money it takes to succeed. Trudeau and Bronfman chuckle] Stephen Bronfman had been named to the party’s national board.

Apparently the CBC was incessantly reporting on the redesign of The National all of Monday as if it a breaking story instead of all the incredible news still developing from yesterday. Even Sunday’s broadcast wasted 30 seconds hyping it. Tomorrow I’ll have fun deconstructing the stupid concepts of having four hosts and less stories. I’ll also have the letter to the ombudsman on how the CBC has still refused to report on the explosive, and very likely real, allegations that Hillary Clinton rigged the DNC nomination.

If you’re fed up with CBC’s bias please make sure to click on the link below and give Sunday’s program a thumbs down.